An easy way to view the full dimensional metrology range in one virtual showroom:

Shipbuilders and marine engineers Cammell Laird recently won the £150m contract to build the Sir David Attenborough polar research vessel against fierce international competition.  When it came to alignment of the ships propeller shafts to the marine engine they turned to another UK company, Taylor Hobson, and used their Micro Alignment Telescope to ensure precision alignment of their propulsion machinery.

Cammell Laird has a long history and wide experience in the shipbuilding, conversion and repair markets and understands the complex nature of the build and the polar specifications required.  A robust design combined with optimum fuel efficiency is essential in propellor and engine design and alignment is a vital factor, since any distortion can lead to vibration and wear. 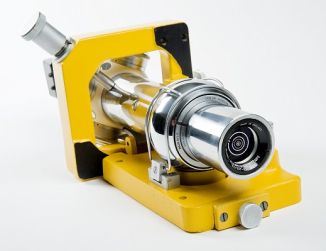 The Taylor Hobson range has been used for applications such as alignment of propulsion machinery since the late 1930s.  The range includes Micro Alignment Telescopes (used for checking and setting straightness and alignment) which are typically used to align the position of the ships engine in relation to the propellor shafting and stern tube.   Other tasks include alignment of the engine to the stern tube and alignment of rudder bearings.

Despite the advent of laser techniques, the Taylor Hobson Alignment Telescope remains a popular choice throughout the shipbuilding and repair sector due to its’ high accuracies and ability to withstand harsh environments.  The Alignment Telescope has the advantage of being capable of running entirely without power since it is essentially based on sound mechanical and optical principles.  Equally, this established technology can be enhanced with the use of new CCTV and CCD technology for enhanced magnification and remote viewing when working in difficult locations, allowing a number of operators to view the image at the same time and to digitise the telescope allowing computer processing of the measurements.

The Alignment Telescope is sold around the world through Taylor Hobson’s worldwide network – the equipment is also sent on hire for individual jobs during refurbishment projects.