Explore New Dimensions at the National Space Centre: Spectrum Metrology will be hosting an Open Day this June in conjunction with Taylor Hobson and FARO. Register now ... 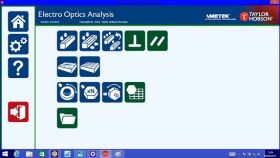 With it’s touch screen operation and icon driven menus, the new Electro Optics Analysis software from Taylor Hobson is making life easier for users of the Ultra Autocollimator for a range of machine tool measurement applications.

Among the large number of applications using the Ultra Autocollimator, the most common is the simultaneous two axis straightness measurement of machine tool slideways.  The latest software used with the Taylor Hobson autocollimator offers significant time-savings when carrying out these measurements.  The software is Icon driven which means that all measurement steps are shown as a clear pictorial display.  Each stage of measurement is prompted by the software, which also indicates when any error of operation has occurred, making it simple for even inexperienced personnel to carry out measurements. 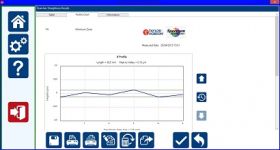 Measurements are automatically taken for both X and Y directions at each measuring position along the slideway. Typically a ten metre slide can be checked in just a few minutes - a considerable reduction in the amount of time taken compared with more conventional methods.  With the addition of the Talyvel electronic level, twist or roll can also be measured.

straightness measurement of slideways with autocollimator

A reflector is used in conjunction with the autocollimator, mounted onto a carriage, specifically designed for dual axis measurement.

Up to 90 measuring steps can be taken for straightness checking and all steps must be of equal distance.  The reflector carriage is moved along the slideway in equidistant steps.  Any out-of-straightness in either of the two surfaces (side and top of the slide) will cause the carriage to change angle with respect to the autocollimator, and it is these changes which are measured and computed to determine the error in straightness.  With the addition of an optical square, squareness and parallelism can also be checked.

The new software also allows the results to be presented in a variety of graphical and tabular forms and printed in the form of a certificate with a record of any additional measurement/environmental data.

See a video of the Ultra Autocollimator in action