An easy way to view the full dimensional metrology range in one virtual showroom:

A team from the University of Leicester’s department of Physics and Astronomy have been developing leading space technology to monitor air pollution around Leicester and Peterborough, using a specially designed camera fitted to an aircraft.  Using the Taylor Hobson autocollimator, the scientists were able to align the optics in their camera to gain the sharpest possible image for accurate and repeatable results.

The University of Leicester’s space scientists successfully carried out the tests earlier this year using an aircraft equipped with a pioneering CompAQS scanner to measure air pollution, in particular nitrogen dioxide, in the environment.  The instrument is part of a major initiative to improve the UKs leadership in space instrumentation for Earth Observation and the University is hoping to send the CompAQS on a space mission in the early 2020s.

The CompAQS was designed, built and tested at the University of Leicester in collaboration with Surrey Satellite Technology Ltd and DL Optics Ltd.  It monitors visible light and measures how much light is lost at specific wavelengths absorbed by nitrogen dioxide.  Using this information, researchers can determine how polluted areas of the landscape are, including motorway junctions, airports, carparks and urban environments. This is valuable data to allow planners to mitigate the impact of pollution on health. 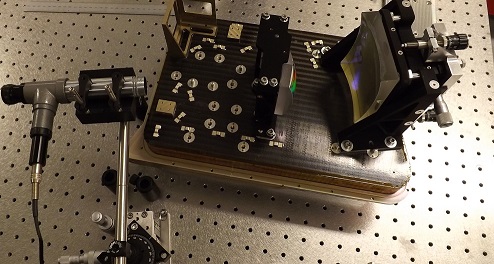 It was important to align the optics in the camera in order to gain optimum accuracy and give repeatable results.  To align the optical components within the scanner a Taylor Hobson autocollimator was used.

This principle was used to align the optics in this specialised scanner – using the autocollimator to first measure the offset in the centre of curvature between the lens and the grating, then to align the mirror.